“Anhedonia”, Tesseracts Twenty-One (2018)
Patient Zero had always been an unhappy man, and because of this, no one would ever be exactly sure when and how the virus began.

“Captain Canada”, Prairie Fire (2018)
Seven years after the divorce, Captain Canada completed construction on the new lake house and invited his family up over the long weekend to celebrate.

“Most Likely to Break”, SAD Magazine (2017)
The day before my first day of high school, my older sister, Sara, gave me some advice that I still follow today. “Be nice to weird people,” she said. “You never know who will end up being a school shooter.”

“The Mandrake”, Grain (2017)
Angelina and Rick had been trying to conceive for three years when he brought a mandrake home from the university. “Mandragora.” He pronounced each syllable.

“From A High Place”, The New Quarterly (2017)
After university, Emma and I moved to an overpriced and under-square-footed apartment on the hipster (i.e., moderately less expensive) fringe of downtown Vancouver to try to break into the film industry. 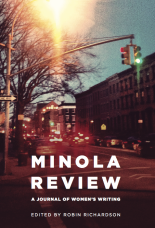 “Erase and Rewind”, The Minola Review (2016)
Louisa discovered she could reverse time on a dim suburban street, forty-eight minutes after the end of the assault.

republished on roommagazine.com as part of the “No Comment” Project (2016)
republished in The Minola Review‘s anthology (2018)

“Thunderstruck”, The Impressment Gang (2016)
Head. Game. Four minutes left in the third, 0-0. My stomach lurches and sends bile up my esophagus and into the back of my mouth. I swallow. Puck drops. I’m too slow and lose—on the bench, someone says shit.

“Faking It”, Joyland (2015)
The day before our plane caught fire, Karen Phillips brought up lesbians in the change room after our sixth and final game of nationals.