Meghan Bell is a writer, and the author of the short fiction collection Erase and Rewind (Book*hug, 2021). Her writing has appeared in over a dozen literary journals and magazines, including Rattle, Joyland, Grain, The Puritan, Prairie Fire, The Walrus, and Contemporary Verse 2, as well as in festivals such as the Vancouver and Victoria Fringe Festivals and the Victoria Film Festival. 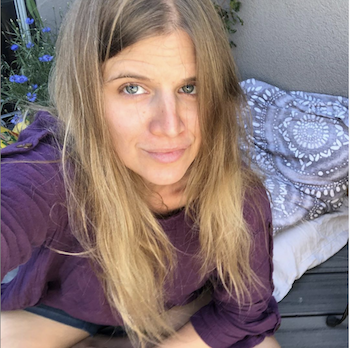 Meghan has worked in marketing, digital communications, and grant-writing for multiple arts organizations in the Lower Mainland, including the Vancouver International Film Festival, Evergreen Cultural Centre, Just For Laughs NorthWest, and Room Magazine, where she was publisher from 2016-2019. In 2017, along with Chelene Knight, Arielle Spence, and their colleagues at Room, she co-founded the literary festival Growing Room, and acted as the festival’s marketing and development manager, working under festival directors Spence (2017) and Knight (2018, 2019), for its first three years. The festival received glowing coverage by The Toronto Star, The Georgia Straight, The Tyee, Discorder Magazine, The Vancouver Sun, and The Quill & Quire, among others. Growing Room was cancelled indefinitely in 2020 due to COVID-19. Meghan also was the lead editor, designer, and project coordinator for the publication of the magazine’s fortieth anthology, Making Room: Forty Years of Room Magazine (Caitlin Press, 2017).

Shortly before the 2019 Canadian election, Meghan published an essay on The Walrus arguing for a wealth tax within Canada. The essay went viral in Canada and went on to win silver in the 2020 Digital Publishing Awards, and received an honourable mention in Best Canadian Essays 2021. She has since written about wealth, narcissism, and the relationships between capitalism, inequality, and mental illness for The Tyee and Passage. She lives in Vancouver with her husband and daughter.